This pumpkin cheesecake with candied pecans is so rich and so decadent, you’ll never look at cheesecake the same way again. A perfect graham cracker crust is topped with a layer of cheesecake and another layer of pumpkin pie, then the entire dessert is finished off with candied pecans. Served with homemade whipped cream, it’s a dessert that’s as beautiful as it is delicious.

Cheesecake is one of those classic desserts that all of us know and love. It’s rich, sweet, and has a hint of tang from the cream cheese. That sweet tangy richness comes together perfectly to create a dessert that has all kinds of delicious flavors dancing around in our mouths with every bite.

In addition to being so good, cheesecake is also so unique. There are literally hundreds of variations on this dessert. From crust-less cheesecakes to layered cheesecakes in all sorts of flavors, this is a dessert that begs to be played with, and that’s just what I did to create my pumpkin cheesecake recipe with candied pecans.

I’m going to put it on front street right now. This recipe takes a bit of effort and a bit of time. That being said, it’s so delicious and so worth the time. It’s loaded with classic cheesecake flavor and then accented with a fantastic pumpkin layer and topped with candied pecans, all of which create a dessert that’s so decadent and delicious, everyone will come back for more again and again.

We start with a simple graham cracker crust baked to golden perfection to really bring out the buttery flavor. From there, we make a traditional cheesecake layer that’s so rich and creamy. A layer of a variation of pumpkin pie filling goes on next. Then we top it off with candied pecans that add an even bigger kick of sweetness along with a fantastic crunch that plays counterpoint to the creaminess of the rest of the cheesecake so well.

I’ve made many cheesecake variations over the years, and this is the one that I keep coming back to, especially when fall rolls around. I’m a big fan of pumpkin and pumpkin spice, so this cheesecake takes centerstage several times during the fall. It’s one of my favorites, and I’m so happy to be sharing it with all of you.

This recipe has a lot of moving parts so there are a few tips here that will help you make it the absolute best pumpkin cheesecake with candied pecans possible. Each of these tips is very simple, but they’re all so important to ensure you make the best cheesecake you possibly can.

Speaking of cream cheese, be sure to beat your cream cheese for at least two minutes until it’s completely smooth before adding the other ingredients. This will ensure a silky texture for your cheesecake.

Room temperature eggs incorporate more easily than cold eggs. It’s the same idea as the cream cheese. It might seem like something as watery as eggs need no help being mixed, but it actually makes a big difference.

You might be tempted to leave the crust raw and just let it bake when you bake the cheesecake filling, but you’ll be missing out on such a rich flavor. Baking the graham cracker crust first really brings out the buttery flavor of the crust.

When making your candied pecans, always melt the sugar and butter together before adding the pecans. This ensures that you’ll get a nice coating on all your pecans. If you add everything at once, it’s far more difficult to create a smooth, sugary blend to coat everything.

To serve this delicious cheesecake, all you need is a fork and a plate! This pumpkin cheesecake with candied pecans already has everything you need right in the cheesecake! You’ve even added the whipped cream so that every slice has a dollop. There’s no need to add anything else.

This is the perfect dessert to serve at Thanksgiving and Christmas, and it’s always a welcome addition to any holiday table.

This cheesecake will keep well in the refrigerator for about four days. For longer storage, you can store this cheesecake in an air-tight, freezer-safe container for up to one month.

Give this Pumpkin Cheesecake with Candied Pecans a Try

This pumpkin cheesecake with candied pecans is so delicious, it’s absolutely worth the effort. Although it takes a little time and work, the flavor is just so amazing. It’s the perfect special dish for any holiday or just a special weekend dessert. Give this recipe a try, and I know you’ll love it as much as I do. All of those “oohs” and “aahs” when you bring it out to the table make it all worthwhile!

(Actual measurements are in the recipe card below.)

How to Make Pumpkin Cheesecake with Candied Pecans

Preheat oven to 350° and line a 9 inch springform pan with parchment paper and lightly spray with a non-stick cooking spray. Set aside.

In a medium bowl, add graham crackers, sugar, and butter. Mix until fully combined and press into prepared springform pan. Press crust up along the sides as well as into the bottom. Bake for 10-12 minutes. Remove from oven and let cool.

In a medium bowl, beat cream cheese until smooth. Add in eggs, sugar, and vanilla. Beat until combined and place in fridge to chill for 30-40 minutes. Spoon on top of cooled graham cracker crust.

In a medium bowl, whisk eggs until light and fluffy. Add pumpkin, milk, brown sugar, sugar, cinnamon, nutmeg, and salt. Stir together until combined. Gently pour pumpkin mixture over cream cheese. Bake for 45-55 minutes or until the sides are set and center is still a bit jiggly.

In a small saucepan, add chopped pecans, sugar, and butter. Over medium heat, stir until butter and sugar has melted and turned a brown color, approximately 7-8 minutes. Pour pecan mixture onto a butter cookie sheet and spread out in a single layer and let cool completely. Once cooled, break into small pieces and add to the top of cheesecake.

In a small bowl, add heavy cream, sugar, and vanilla and beat until stiff peaks form. Add whipped cream to a piping bag and add whipped cream around the top of the cheesecake. Sprinkle with candied pecans.

Here are a few more delicious dessert recipes that can be found on the blog:

And here is a Pumpkin Pecan Cake from Great Grub, Delicious Treats that might enjoy as well. 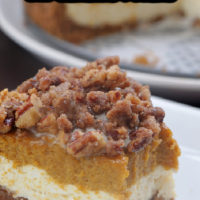 For The Graham Cracker Crust

For The Cheesecake Layer

For The Pumpkin Layer

For The Pecan Topping

For The Homemade Whipped Cream

For The Graham Cracker Crust

For The Cheesecake Layer

For The Pumpkin Layer

For The Pecan Topping