If you’re looking for a new holiday recipe to try this year, then you’ve come to the right place. If you’re simply looking for a way to make plain cinnamon rolls even more delicious, you’ve still come to the right place. These delicious cinnamon rolls take the classic sweet treat and dresses them up with a delicious cranberry orange sauce and a brown sugar pecan crust. I just started making this recipe a little while ago, and it instantly became a holiday favorite. The thing is that they’re so good, I just can’t wait until the holidays. So I routinely make them throughout the year, as well. Shhhh. Don’t tell my family!

These delicious holiday cinnamon rolls start with Pillsbury refrigerated cinnamon rolls with icing. Then, I dress them up with a sweet and tangy cranberry orange sauce and top them with a sweet and crunchy brown sugar pecan crust. What I end up with are cinnamon rolls that are absolutely overflowing with festive holiday flavor. They’re perfect for a special holiday breakfast, a sweet addition to your family’s holiday meal, or to bring to any holiday potluck.

What to Serve with Cranberry Cinnamon Rolls

These are perfect when served alongside other sweet treats at your holiday gathering. They also make a sweet addition to any special holiday breakfast. Some great ideas include:

How do you elevate Pillsbury cinnamon rolls?

There are a few things you can do to dress them up..

Can you eat fresh cranberries without cooking them?

Yes. Fresh raw cranberries are safe and healthy, although their sharp taste isn’t for everyone.

Can I make these ahead of time?

These reheat fairly well, so you can make them the day before you plan to serve them. However, they are best when made the same day.

How long do cinnamon rolls last?

They’ll last for about 2 days at room temperature or up to a week in the refrigerator.

Can you freeze baked cinnamon rolls?

Absolutely. They freeze well for up to 2 months.

How to Store and Reheat Leftover

Store them covered at room temperature for up to 2 days or refrigerate them for up to a week in an airtight container. For longer storage, open-air freeze them, then place them in an airtight, freezer-safe container or wrap individually in plastic wrap and freeze for up to 2 months.

To reheat, place them in a baking dish, cover them with foil, and bake for 10 to 15 minutes at 350 degrees until heated through.

You’ll only need some simple ingredients to make everything in this recipe. You’ll find them all readily available at your local grocery store.

How to Make Cranberry Cinnamon Rolls

Making these cinnamon rolls couldn’t be easier. It only takes a few simple steps, and you’ll be in and out of the kitchen in no time.

Preheat the oven to 375 degrees and spray a 7×11 baking dish with nonstick spray. Set aside.

In a medium saucepan, heat cranberries, sugar, brown sugar, orange zest, orange juice, and cornstarch over medium heat. Bring to a boil and cook until the cranberries burst and the mixture thickens. Remove from the heat and let it cool a bit.

Stir the brown sugar, flour, pecans, and melted butter together until combined in a small bowl.

In a small bowl, combine the heavy cream, brown sugar, and cinnamon.

These cranberry rolls are a festive, delicious addition to your holiday gatherings. They’re also easy to make which doesn’t hurt! Give these a try, and you’ll soon find that they’re the hit of any party you attend. And don’t forget that your family will love them as an extra special holiday breakfast or brunch, too!

Maple Cinnamon Rolls – These are made completely from scratch, with a hint of maple flavors, and topped with an absolutely delicious glaze.

Pear Cobbler – This pear cobbler has a sweet cream cheese layer, fresh pears, and a delicious cobbler topping, all made with a delicious cinnamon roll crust.

Honey Buns – A different variation of a cinnamon roll, but just as delicious. It’s a sweet breakfast recipe that is topped with a homemade icing.

And, try these Crescent Roll Cinnamon Rolls from Great Grub, Delicious Treats. They’re and easy breakfast recipe made with Pillsbury crescent rolls and topped with a gooey, sweet mixture of chopped apples and pecans. 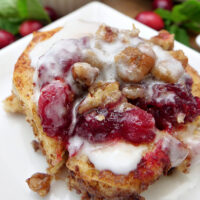