This pear cobbler is made with a cinnamon roll crust, a sweet cream cheese layer, fresh pears, and a delicious cobbler topping. A delicious cobbler recipe that will be a hit at any family gathering, potluck, party, or on the dessert table at the next holiday celebration.

Cobblers are a classic dessert, but I think we can all agree that the traditional cobbler, although delicious, has become a bit old hat. Everyone is always glad to see it on the table, but you’ll never hear anyone say, “What is that?!” That’s why I’m really loving the delicious pear cobbler that I’ve discovered. It has all the classic flavors we love in cobbler along with some unexpected twists that are completely different. It’s one of those recipes that looks good but tastes great, and the best part is that it’s just as easy as it is tasty.

Recently, I was invited to a party, and I wanted to bring something a little different, so I gave this new recipe a try. After tasting it and watching it disappear almost immediately at the party, I knew I had to share it with all of you. It’s a total game-changer.

This delicious cobbler is filled with a sweet pear filling like any that you’d expect in a cobbler, but wait, there’s more. It also has a deliciously luscious cream cheese layer, as well. All of that filling is layered over a cinnamon roll crust, and then it’s all covered with a classic cobbler topping. What you end up with is a dessert that’s a bit like a cobbler, a bit like a pasty, and of course, accented with the flavor of cinnamon rolls. It’s a bit of a Frankenstein’s Monster of a dessert, and it is absolutely as delicious as it sounds.

What to Serve with Pear Cobbler

Serve this cobbler warm topped with whipped cream or a scoop of vanilla ice cream. It’s also delicious with a glass of milk or coffee. It makes a delicious dessert after almost any meal including dishes like:

What is the best way to preserve pears?

Freezing, canning, and dehydrating are the most common forms of long-term pear storage. All of them work well. It’s a matter of personal preference.

Do you have to peel pears before freezing?

Can fresh pears be frozen?

Absolutely. It’s one of the most popular ways of preserving them.

How long will this pear cobbler last?

It will keep in the refrigerator for up to 4 days. For longer storage, you can freeze it for up to a month.

How to Store and Reheat Pear Cobbler Leftovers

To reheat this cobbler, allow it to come to room temperature. Then, bake it for about 20 minutes at 350 degrees.

It only takes a few simple ingredients to make every part of this recipe. Most of them are pantry staples. Anything you don’t have can be easily found at your local grocery store.

For the full list of ingredients and measurements, see the recipe card at the bottom of this post.

How to Make Pear Cobbler with Cinnamon Roll Crust

Making this recipe is just as easy as the ingredient list. There are a few steps, but they’re all very simple. Even beginners can make this recipe.

Preheat the oven to 350 degrees and spray a 9×13 baking dish with nonstick cooking spray. Set aside.

Roll out the crescent rounds, pinching together any perforated edges. Then, evenly spread 2 tablespoons of butter over each rolled-out slab of dough. Sprinkle each dough with ¼ cup of brown sugar and sprinkle 1 tablespoon of cinnamon.

Starting with the shorter end, roll the dough tightly into a log. Then, slice each log into 1-inch pieces, cutting and discarding the ends. Chill for 15 to 20 minutes in the refrigerator.

Step 4: Roll the Cinnamon Rolls Into a Crust

Remove the cinnamon rolls from the fridge and place them on a well-floured surface. Roll them out with a rolling pin, then place them in the prepared baking dish.

Cream the cream cheese, sugar, egg yolk, lemon juice, and vanilla together in a medium bowl. Then, spread the mixture over the rolled-out cinnamon rolls.

Add the sliced pears, sugars, lemon juice, cornstarch, and cinnamon to a large bowl and mix until well combined. Then, spread the mixture evenly over the cream cheese layer.

Whisk the flour, sugars, baking powder, and salt together in a small bowl. Then, cut in the butter using a pastry cutter. Pour in boiling water and mix well with a fork. Finally, spread the topping over the pear filling.

Bake the cobbler for 40 to 50 minutes or until the topping is golden brown. Enjoy!

This homemade pear cobbler is everything we love about cobbler and then some. Starting with an unexpected cinnamon roll crust, a luscious cream cheese layer, and then moving on to classic pear filling and cobbler topping, this fall dessert recipe is one that no one will expect or be able to say no to! Give it a try, and I know you’ll keep it in your dessert rotation for a long time to come.

Peach Cobbler – Sweet juicy peaches coated in delicious warm spices with a blissful buttery crumb topping and baked into a mouthwatering peach dessert you are going to absolutely enjoy.

Strawberry Rhubarb Cobbler – This delicious cobbler combines both strawberries and rhubarb together to create a scrumptious cobbler recipe with a cake-like topping that is amazingly delicious.

Easy Blackberry Cobbler – This blackberry cobbler recipe is one of the easiest you’ll ever make using blackberry pie filling and a delicious cobbler topping, it’s the perfect dessert all year long.

And, here is a Triple Berry Cobbler, from Great Grub, Delicious Treats, that tastes amazing and is super easy to make too. 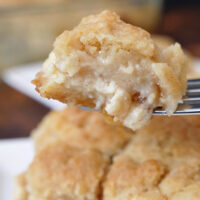 For the Cinnamon Roll Crust

For the Cream Cheese Layer

For the Pear Filling

For the Cobbler Topping

For the Cinnamon Roll Crust

For the Cream Cheese Layer

For the Pear Filling

For the Cobbler Topping