Who here loves a great pear cobbler recipe? I can’t see you because this is a blog post, but I’m going to assume that anyone reading this agrees that pear cobbler is delicious. While almost everyone immediately thinks of peaches when they think of cobbler, almost any fruit can really be used for it. Apples, berries, of course, peaches – they’re all excellent fruits for a cobbler recipe. I love making them all, but this cobbler is one of my favorites.

I make cobblers often, especially when the cooler weather rolls around. In the summer, I love to make them with fresh fruit from local farmers’ markets. When they go out of season, I simply buy the fruit from my local grocery store. Of course, fresher is better, but when you add all the sugar and spices to the recipe, a pear shipped from somewhere like South America works just as well as a pear grown locally.

Making cobblers is a tradition of mine. I’ve made them as family desserts for years. For all that time, I’ve also been bringing them to potlucks and holiday get-togethers, as well. They’re just so deliciously sweet and warm, and of course, you can’t beat that delicious topping. It’s absolute comfort food. This delicious cobbler is no different, and I can’t wait to share it with all of you.

Cobbler is a dessert made of a fruit filling poured into a large baking dish and then covered with a batter, biscuit, or dumpling, depending on the region in which it’s made.

Its origins are from the British American colonies. In those times, English settlers weren’t able to make their traditional suet puddings thanks to a lack of ingredients and cooking equipment. Instead, they created a stewed filling of fruits – sometimes savory options were used, as well – and topped it with a layer of uncooked biscuits, scone batter, or dumplings.

No one knows exactly when the term “cobbler” was used, but its first recorded use was in 1859. Many food historians believe that the term could be due to the topping having the appearance of a cobbled stone pathway.

What Types of Pears are Best for Baking?

While there are many varieties out there, there are three kinds that are considered the gold standard for baking. Bosc, Red Anjou pears, Bartlett and D’Anjour are all considered the best pears for baking because they are large, firm, and are widely available in grocery stores all year round.

Do You Have to Peel Pears for Baking?

We’ve all eaten raw pears, and we know how thin their skin can be. That might lead you to believe that peeling them for baking is an extra step that’s simply not required. That couldn’t be further from the truth. Although the skin is usually thin, it becomes tough when heated, so always peel your pears for baking. If not, you’ll end up with a tough, chewy mess.

What Fruit Mixes Well with Pears?

Because pears are sweet but also mild, many fruits mix very well with this tasty fruit. The first that comes to my mind is apples, but there are a lot more. Some great pairings include:

I know, I know. The word best is purely subjective, but I must say that I think my pear cobbler is, in fact, the best you’ll ever eat. It’s bursting with pears, sugar, and cinnamon, and it has a topping that’s not your typical cobbler fair.

Most cobblers involve pouring the crust batter on the bottom of the dish and letting it rise as the cobbler cooks. My cobbler topping is more like a biscuit type of topping, however, and I pour it over the pears. It’s much more substantial and not as thin as traditional cobbler topping. It makes for a more hardy cobbler recipe than you’ll normally find, and that rustic feel is part of what makes it so darn amazing.

This is a simple recipe, but as with anything simple, there are little tricks that can help take this pear cobbler from good to great. These are simple tips, but they make a big difference so be sure you don’t skip them.

It’s important that you use the coldest butter possible when cutting it into your flour mixture for the topping. The colder the butter, the more crumbly the flour mixture will become, which is exactly what you want. If your butter is soft, you’ll end up with a smooth texture, which is not the goal.

“Golden brown” is a term that often confuses people. It confused me when I first started baking. After all, if you’ve ever seen an overbaked crust, you could still call it golden brown. It does have a golden hue even though it’s mostly brown. When you see the term “golden brown”, think gold over brown. You’re basically baking until the dough goes from white and raw to golden and cooked.

There’s really only one variation to make with this cobbler recipe, and it’s something I just wrote about earlier in the post – fruit! Refer to the list above that lays out the best fruits to use with pears and try mixing in different ones with your cobbler. You’ll have something new and delicious every time!

Like any cobbler, this pear cobbler is perfect with a scoop of vanilla ice cream. Whipped cream is also a winner. It’s just that simple to serve because it’s such a simple dish. Whip up this easy cobbler for a weeknight dessert, or as a welcome addition to any potluck or holiday table. Everyone always loves the delicious flavor. Simply set out the entire dish and let everyone serve themselves.

This cobbler will keep well in an airtight container in the fridge for three to four days. For longer storage, you can freeze it for up to three months. Let the cobbler cool thoroughly in the refrigerator and then cover it tightly in plastic wrap and then foil in its original dish. Leftovers are great too.

Give this Pear Cobbler Recipe a Try

This delicious pear cobbler recipe is overflowing with sliced pears, sweet flavors, and a delicious biscuit-like topping that is absolutely fantastic. It’s one of those recipes that everyone always loves, and it’s so easy to make, you’ll love making it any time. Make a batch for a weeknight dessert or any celebration and get ready to watch everyone beg for more.

How To Make Pear Cobbler

And, here are a few more delicious dessert that can be found on the blog. 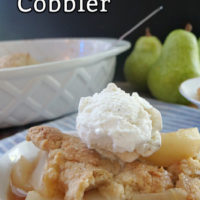 For The Pear Filling

For The Cobbler Topping

Here are a few photos that are perfect to save to your favorite Pinterest boards.