Pies. Is there anything better? I can’t think of anything. Pies are a classic dessert for a reason – they’re absolutely delicious. Over the years, I’ve made all kinds of pies from no-bake cheesecake to lattice-topped pies; apple to mixed berry. You name it, I’ve made it. These days, I find myself making mini pies more and more often. They’re so cute, and they’re so much easier to serve. Everyone gets their own little pie rather than a slice of pie with all the filling oozing out all over the place. Little pies like these are so delicious and so versatile. I love to serve them as desserts, bring them to potlucks, and even serve them up for special occasions like birthdays and holidays. They’re so sweet and delicious, everyone loves them no matter the occasion.

These delicious little pies are full of everything we love about traditional pies. A golden, flaky crust is filled with a sweet, sour cream and pear filling then topped with a crumbly, delicious crumble. These little pies explode with sweet pear flavor in every bite, and they make a perfect treat for almost any occasion. If you love pie, these little mini pies are going to be a new favorite.

Normally, I would have some tips to go with my variations, but honestly, there’s nothing that you need to know that you won’t find in the recipe. The crust is store-bought, and the filling and topping are both incredibly easy. So today, I only have variations for you.

What’s the difference between Bartlett pears and Anjou pears?

What is the most flavorful pear?

There are two top contenders for this title – Bartlett pears and Comice pears. Bartletts are one of the sweetest pears available as well as one of the firmest. They’re the pear most commonly used for cooking. Comice pears have a finer, less grainy texture than other pears and a wonderfully fruity aroma and aroma. They’re one of the best pears for snacking.

What kind of pears are good for baking?

The best pears for baking are Bartletts, Bosc, and Anjou. These have the best texture and flavor for the baking process.

What flavor goes well with pears?

A lot of flavors actually go incredibly well with pears. From sweet to savory, some of the best pairings include:

Can you freeze pear pie?

You sure can. Place the pie in a freezer bag and freeze it for up to 4 months.

It only takes a few simple ingredients to make both the filling and the topping for these tasty pies. You’ll find everything you need easily at your local grocery store.

How to Make Mini Pear Pies

Making these mini pies is quite easy. It only takes a few minutes and a few steps.

Preheat the oven to 350 degrees and spray a mini pie pan with non-stick cooking spray. Roll out the pie crust dough on a floured work surface. Cut out mini crusts with a biscuit cutter. Place the crusts in the prepared mini pie pan.

Mix all the filling ingredients except for the pears together in a medium mixing bowl and pour it into the prepared shells.

Add the pear slices evenly over the top of the filling and bake the mini pies for 10 minutes. Then, remove them from the oven.

Mix all the topping ingredients together in a small mixing bowl.

Sprinkle the crumb topping evenly over the top of the pear pies and bake for 30 to 35 minutes until the pies are set.

Remove the pies from the oven and let them cool completely. Then, cover and refrigerate. Serve cold.

These mini pear pies are rich and delicious with a golden, flaky crust. They’re also incredibly easy to make. With a combination like that, how could you not love them? Give these pies a try, and I know you and your family will enjoy them as much as mine does. Don’t be surprised if you find yourself making them again and again.

Here are Some Delicious Desserts you May Want to Try

Carrot Cake Cupcakes – A delicious, moist, and made completely from scratch cupcake that is topped with an incredible cream cheese frosting.

Easy S’mores Cups – This dessert is so simple and can be made in under 15 minutes. It’s layered with graham crackers, chocolate, and marshmallows.

Mini Strawberry Cheesecakes – This is an easy, no bake dessert that is quick to make and is perfect for parties because they’re an individual serving of dessert. 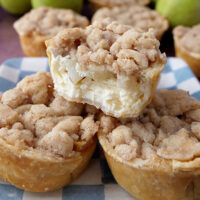 For the Pear Pie Filling

For the Pear Pie Filling

Here are a few pics that are the perfect size for pinning to your favorite dessert board on Pinterest.