I got to mix two passions together with this recipe for peanut butter s’mores brownies and I couldn’t be more thrilled with the results. The name says it all so let’s get into the important stuff you need to know in order to make this spectacular delicious dessert.

Yes. Yes, they are. Not only is it possible, it’s encouraged. Well, I encourage it at least. It is summertime after all. S’mores and other s’more inspired foods are mandatory! All joking aside, though. It’s really hard to imagine letting this time of year fly by without dipping into a little bit of nostalgia. We all have those memories of the first time we ever had a s’more and those memories are always accompanied by summer magic. There is something mysterious and beautiful about the three-note chord struck by the simplest ingredients. That’s why that inevitable display at the supermarket every July is so alluring.

This magnificent creation takes everything you love about this unique dessert and turns it into a brownie. But the genius is in the added twist of peanut butter. Peanut butter is exactly what smores have always needed to finally push toward their full potential. By creating a peanut butter cup brownie layer in between the graham cracker crust and the toasted marshmallows with melted chocolate, I have made the most irresistible and ridiculously indulgent summer treat that doesn’t come out of a freezer.

One of the first things you need to do is get the crust ready for these peanut butter smores brownies. The crust is, of course, made from sweet and mild graham cracker. In order to make this, you need some way of finely chopping the graham into a dust that you can spread over the baking dish. The easiest, fastest and best way to do this is with a food processor. If you don’t have a food processor, I have two tips for you. One is to go get a food processor. You can get them for under $50 or over $500. You know, whatever your budget is. 🙂

The second tip, if you don’t like the first one, or if you want to make these peanut butter smores brownies before your Prime delivery is to use a rolling pin. Now, I know a lot of people who have food processors and don’t have a rolling pin. I’m not sure of the statistics on people with rolling pins who don’t have food processors. Just know that rolling pins are effective at crushing graham crackers in a fairly uniform fashion. Do me a favor and let me know which method you end up using.

How to Cream Butter and Sugar

Creaming butter and sugar is an important skill to get right. If you bake a lot or plan to start baking a lot, then learn this technique. It will make you appear knowledgeable and impressive. When you cream butter and sugar it’s about much more than simple distribution or dissolution of the sugar. What it really does is create pockets of air that are critical to the outcome of the brownie. These air pockets create a leveling effect that will give the finished brownies some wonderful lift.

Start with the butter. Make sure it’s come up to room temperature before you proceed. Beat the butter alone for about 30 seconds at a low speed. Then add the sugar and beat on high speed until the mixture becomes pale and fluffy. Use a stand mixer with a paddle attachment for best results and remember to scrape the sides occasionally.

A Slow Build to a Grand Finale

This is a very simple-to-make recipe with an incredible outcome. The most important part of making these phenomenal peanut butter smores brownies is the gradual mixing. It’s essential that you take the appropriate amount of time as you mix and add ingredients so that each portion of the job gets made to perfection.

The Best Way to Chop A Peanut Butter Cup

It’s harder than you’d think to chop a peanut butter cup. This recipe called for mini-sized cups. You can chop up the peanut butter cups at room temperature with a sharp knife, but you will have to be delicate with them as they are somehow simultaneously crumbly and melty. To give yourself something to work with, I recommend chilling your peanut butter cups in the refrigerator for about an hour before you take a knife to them. This will help them stay intact and make less mess.

How to Know Your Brownies are Done

Before you add the glorious marshmallow top you need to make sure the brownie has cooked through to the center. The way to do that is with a little jiggle. You can always use a knife, but that is best to double-check after you’ve already removed the brownies from the oven. To get an idea of how cooked through a brownie is before you take it out is to see if the center jiggles at all when you shake the baking dish. If it’s set, it’s okay to take it out and insert a knife to see if it comes out clean just to be sure.

How to Cool Your Peanut Butter S’mores Brownies

When you have finished baking the brownies try to resist cutting into them right away. Give them at least 5 minutes to cool. A wire rack is the best place for cooling as it promotes the circulation of cool air around the pan. These brownies are delicious, warm, or cold, depending on what your preference is.

(Actual measurements are in the recipe cared below.)

Preheat oven to 350° and lightly spray a 9 x 13 glass baking dish with a non-stick cooking spray and set aside.

Using a food processer, add 15 graham cracker and chop until finely crushed, or place in a large baggie and crush with a rolling pin. In a small bowl, add graham cracker crumbs, melted butter, and ½ cup of sugar. Mix well.

In a large bowl, cream together butter and sugar until light and fluffy. In a separate bowl, whisk together flour, baking powder, and cocoa. Add the flour to the butter mixture and use an electric mixer to mix ingredients until well combined. Next add in milk and vanilla. Add in eggs, one at a time, mixing well after each addition. Stir in chopped peanut butter cups and then pour brownie batter mixture onto the graham cracker crust and spread evenly.

Place in the oven and bake for 22-25 minutes or until the center is cooked and a toothpick inserted comes out clean. Remove from oven and turn broiler to low.

Here are a few more delicious recipes that can be found on the blog:

And here is a delicious Caramel Bread Pudding from Great Grub, Delicious Treats that you might enjoy as well. 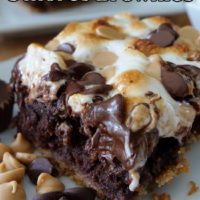 For the Graham Cracker Crust

For the Graham Cracker Crust

646Shares
We use cookies to ensure that we give you the best experience on our website. If you continue to use this site we will assume that you are happy with it.Ok