Cinnamon Toast Crunch bread pudding combines the delicious flavor of the classic sweetened cereal with the wonderful eggy texture and flavor of bread pudding. It’s a simple recipe that is heavy on flavor and light on work, the perfect dish for breakfast, brunch, or dessert!

My kids love eating Cinnamon Toast Crunch and when we made this delicious bread pudding, they couldn’t get enough of it. I also remember loving this cereal as a kid as well. We all still love this delicious classic cereal. All that sweet cinnamon goodness mixed with the milk at the end of it all – it’s just absolute sweet breakfast perfection.

Although some people seem to think that you have to eat boring cereal like Corn Flakes or Shredded Wheat when you grow up, my kids and I disagree! In fact, we love it so much that I decided to combine the flavor of our favorite cereal with one of our favorite desserts and snacks – bread pudding!

I got the inspiration to make this bread pudding a while back when I was grabbing coffee creamer at the store. As I walked down the aisle, I saw Cinnamon Toast Crunch coffee creamer. I had no idea they made it, and I was so excited! I got a bottle of it, and I’ve never looked back.

I simply used my basic bread pudding recipe, substituting Cinnamon Toast Crunch creamer for milk, and continued on as usual. It was an instant hit! I was in love with it immediately, and when my kids tried it, they were immediately hooked, as well.

Like all bread pudding, this particular recipe lends itself very well to variations. This recipe is simply soaked bread that’s baked and then topped with a glaze, so you can get very creative with it. Try changing different aspects of the recipe to make different flavor and texture combinations.

Almost any creamer will work in the recipe, which means you can make any flavor of bread pudding you want. Head to the creamer section, and you’ll find all kinds of creamers to experiment with! You’ll find everything from this Cinnamon Toast Crunch creamer to caramel, classic French vanilla, and a lot more. It’s an easy way to change the entire flavor of the pudding.

If you try a different creamer, try different cereal as the final topper, as well! For example. French vanilla creamer and a granola cereal would work well with bread pudding. Hit the cereal aisle, and let your creativity flow.

I love using challah bread for its flavor and texture, but you can use any kind of bread you like. I don’t recommend sliced loaf bread, however, as it doesn’t stand up to the process of making the pudding as well. Other than that, any kind of bread will work.

Go as hardy or as light and airy as you like. It’s all good!

This recipe is super easy. There really isn’t much to it at all, which means you’ll be in and out of the kitchen in no time. However, even the easiest recipes can be done in certain ways to make them come out exceptionally well. The following tips are super easy, but they help you add so much to your Cinnamon Toast Crunch bread pudding.

If you don’t have non-stick spray, you might be tempted to skip this part of the recipe. After all, bread pudding can be fairly wet. Why not just skip it? Don’t do that.

Bread pudding can and will stick to your baking dish. Don’t fall into that trap! Make sure every part of your baking dish is fully covered in spray so your delicious pudding isn’t ruined.

Let the Bread Sit for a Few Minutes

After combining your liquid ingredients and coating the bread, let it all sit for a few minutes. This allows the bread to really soak up all the delicious goodness before you bake it. It’s a small thing that can add a lot to the flavor and texture.

We usually will cover bread pudding when we bake it. The foil helps keep the pudding from getting too brown and also helps keep it from drying out. The foil is removed and the pudding continues to bake for 15 more minutes uncovered.

This Cinnamon Toast Crunch bread pudding is absolutely delicious, so easy, and exceptionally easy to serve. All it needs is the buttermilk glaze. That’s it. It needs no other toppings or garnishes.

To serve, simply scoop out some of the pudding into a bowl and enjoy! This pudding is very good with a glass of milk or cup of coffee.

Serve this delicious bread pudding as an after-dinner dessert, a sweet breakfast, or an afternoon snack. It’s perfect for pretty much any time of day, and it’s so delicious, everyone will always welcome it with spoons in hand!

How To Store Bread Pudding

There are two things to note, however. The longer your bread pudding is frozen, the more the taste and consistency will change. In addition, you MUST freeze the bread pudding without the sauce on top or it will become a soggy mess when defrosted.

This Cinnamon Toast Crunch Bread Pudding takes our favorite kids’ cereal and combines it with a classic dessert into one ultimate treat that everyone loves. It’s an easy recipe that comes together quickly and always tastes so, so good. Give it a try, and I know you’ll love it as much as I and my family do.

For the Bread Pudding

For the Bread Pudding

Here are a few more delicious dessert recipes that can be found on the blog: 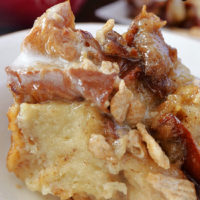 For The Bread Pudding

For The Bread Pudding

412Shares
We use cookies to ensure that we give you the best experience on our website. If you continue to use this site we will assume that you are happy with it.Ok