I love Chinese food. One of the things I love most about Chinese food is the chow mein. Rice is good, but no other Chinese side dish beats chow mein, especially when it has a very hearty recipe and comes packed with everything you would want in a full meal. That’s what my shrimp chow mein has to offer. That and a lot of spice.

This is a hearty and flavorful, sweet, savory, spicy blend of incredible Asian flavors, textures, and seasoning. It has a unique seafood spin that is far too uncommon for my taste. That’s why I made the version in the recipe below. It’s so tasty and satisfying and I’m sure you’ll love it, too.

If you are unfamiliar with chow mein or how it’s made, then here is a little bit of background on the surprisingly diverse dish. I’ll introduce you to other versions of chow mein and how to prepare it with shrimp.

What is Chow Mein?

Lots of people still don’t know what chow mein actually is even though it is one of the most popular Chinese dishes around the world. Chow mein has been served in a variety of forms in America alone over the last hundred or more years. The regional preferences for how to make and serve the dish helps to add to the confusion. Chow mein in New York is completely different from chow mein in San Francisco. The primary difference being a crispy vs. a steamed noodle.

What chow mein actually means is stir-fried noodle and that’s essentially all that it is. Traditionally, it is cooked with onion and celery. However, those ingredients can be strained out, especially from the crispy East coast version of the dish in America.

Besides the onions and celery, chow mein may be prepared with any number of vegetables or proteins. Chicken is the most common, but beef and pork are also common, as is tofu. Plenty of chow mein offerings have no meat or vegetarian substitute at all.

Chow mein gets a lot of different types of treatment in areas where it needs to be modified to gain the approval of local palates. A common trend throughout America is to serve chop suey as chow mein, even though chop suey has no noodles. For comparison, chop suey is meat and eggs cooked rapidly with vegetables and bound with a starchy sauce. It is often served with chow mein, rice, or both.

What’s the Difference Between Chow Mein and Lo Mein?

They’re both noodle dishes, but they are usually prepared differently. I say usually because some places that serve chow mein refer to it as lo mein, particularly on the east coast. This may lead to part of the confusion. When there is little consensus in America on what constitutes chow mein, it’s hard to differentiate it from other forms of Chinese noodle preparation. Lo mein is traditionally made with fat round noodles. Unlike chow mein which should be cooked separately from the vegetables and/or meat, lo mein is tossed in at the end of the cooking process to absorb the sauce. This makes sense because according to Google Translate, lo means slightly. As in slightly cooked.

Shrimp is an excellent protein to make chow mein with. I took a little bit of Japanese influence for my chow mein and I thought the seafood touch was really nice. However, when you prepare shrimp there are several things to keep in mind and to do before you cook this dish. preparation is very important.

The first thing is kind of a pet peeve of mine because I hate when I’m eating a shrimp pasta dish and I have to pick out the shrimp to pull out the tails before I can eat. Who wants to get sauce all over their fingers picking through pasta for shrimp tails? Nobody. I am a firm believer in taking the tail off before you cook.

The other thing you want to be sure you do is devein the shrimp. That means clearing out the intestine with a paring knife. It isn’t hard to do and it’s an essential part of cleaning the shrimp to prepare it for cooking. There is some debate about whether deveining shrimp is necessary. I’ll save you the time. Yes, it is. Nobody wants to see that in their food.

How to Serve This Dish

You can serve shrimp chow mein on its own or as a side. It’s very hearty and it has all the protein and veggies you can ask for. The best way to enjoy Chinese food is to take a small portion of a variety of entrees and have a ton of leftovers to pick at throughout the week. The best way to store your shrimp chow mein, or any other Chinese dishes is in an airtight container. You can enjoy chow mein cold from the refrigerator or refry it in the skillet. If you choose the skillet, make sure you let the chow mein sit for a while so you don’t put it into the pan cold. It will cook better that way.

How to Make Shrimp Chow Mein 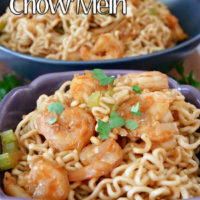 Here are a few pins that are the perfect size for pinning to Pinterest.